skip to main | skip to sidebar

Art and science are nowadays separated into conflicting areas within knowledge
production. Art is aligned with the improvised, intuitive and creative moment,
while natural science affirms itself through the use of mathematical methods
and the generation of instrumentally recorded images as a source for measurable
and undeniable truths.

The exhibition of Nicole Degenhardt and Frank Schäpel,ARE THERE BACTERIA IN THE ROOMS OF MONTE CARLO, questions the setting of norms and values in knowledge production and thereby troubles the conditions for objectifying rationality of scientific disciplines. To what extent is the hegemony of natural science still appropriate, in view of possible errors in empirical methodologies and of residual doubt over adequately decoding results in the given time. How does natural science deal with phenomena(such as death, the unconscious,extraterrestrial life) that elude empirical verification, while on the same time seem to transcend our imaginative abilities?Could art here accompany the natural sciences and contribute to the “creation of a contemporary, viable human consciousness” (Frank Schäpel)?

Frank Schäpel’s studies of the body and planets bring together the genuine and
productive achievements of both disciplines. Schäpel’s clinically true-to-detail
image production aesthetic requires a neutral examination that, beyond a rational
argumentation for the apparent, demands further aspects of perception, as well as
imaginary references. 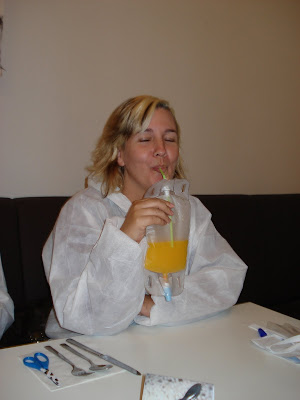 BioBuffet: Where art and science meet in the everyday from Stephen Surlin on Vimeo.

Labels: a street with a view, Google street view 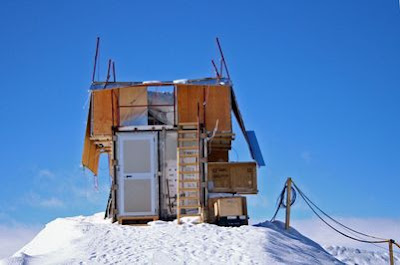 Call for presentations
Art as well as science strive to understand and grasp the world, they
consider the nature of things, the coming into being of objects, the many
ways in which life is performed. Science and art communicate and interact,
they influence and "co-create" each other and- as we assume - reciprocally
depend on each other.

In recent years this relation has become more manifest. As scientific
thoughts left the labs, researchers entered the cultural world. The spectrum
of such cultural activities encompasses exhibitions or museums (e.g. European
Science Fair, science museums); it embraces science fiction literature by
physicians turned into prominent writers (like Michael Crichton or Carl
Djerassi) and goes way beyond turning the scientific world mundane in TV
series such as CSI.

At the same time, various artists have started to reflect about scientific
practices. While certain artists considered their work as research, others
began to work with scientific objects (e.g. Mark Dixon, Richard Barnes with
natural history collections, dioramas and stuffed animals). Some now go about
to explore the leftovers of a scientific society (like Scott Hocking who
tells Latourian fotoromanzas of homeless scrappers, picking up the material
leftovers of a technoscientific society), or comment on biomedical
technologies (like the Indian artist Shilpa Gupta with her web-installation
on the international organ trade).

These works and commentaries highlight scientific trends especially in
biomedicine and biotechnology in a twofold manner: Artists as well as
scientists continuously contribute to cultural practice, to political and
social statements, while they challenge assumptions about what it means to
produce scientific or artistic knowledge.

In our stream we would like to discuss the roots, agents and purposes of this
practices by a deeper going analysis of concrete examples (from literature,
new media, movies, classical and modern art, exhibitions). We will also ask
how science and art are performed and what they precisely transform when they interact and we wonder whether and if so how methodologies, contents,topics,and researchers themselves are altered. Furthermore, we are interested in socio-cultural analyses of how these interactions might influence the relationship between science and society, or understandings of expertise and lay knowledge and, last but not least, what scientific research may be about.

We, therefore, invite scholars from all disciplinary strands as well as
artists with an interest in these questions to give a talk or a presentation
of a work of art that we could show and discuss during the stream.

Abstracts of no more than 500 words should be sent by email, see instructions on this website: http://events.unitn.it/en/easst010/abstract-submission.
Gepost door Artsandgenomics.blogspot.com op 12:48 Geen opmerkingen:

About the art, philosophy & science blog

Artsandgenomics.blogspot.com
Netherlands
Hi there, my name is Olga. This blog on art, philosophy and science, is created by me while working as a scientific manager/post-doc at The Arts & Genomics Centre in Leiden. At this moment, I'm no longer working there, but I'm still into ArtScience! I'm a creative philosopher, mad about organising special events that combine philosophy, science and art. This year, I will finally complete my PhD on ethics, religion, science & democracy in public debates on biotechnology.

Feed the fish with your mouse!